What is XLR socket？

On the structure of the Cannon (XLR) head, it has a metal or plastic shell with a tenon or a hole for the tenon to hook, so that the male and female heads will not fall off after they are combined; its The contacts can range from two to as many as seven, and most of the Canon (XLR) connectors used in general audio equipment are three contacts. The difference between the Cannon head and the RCA head is that the RCA head must be a male head, and the socket must be a female socket (pointed by the arrow). 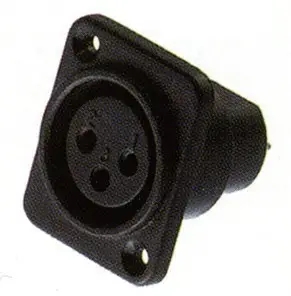 However, the Cannon connector is male and female, whether it is a head or a seat. Here is another explanation: the so-called head refers to the movable connector connected to the signal line; the so-called male means that the signal contact is in the shape of a rod. Similarly, the female means that the contact point is hole-shaped. Generally speaking, the output end of the signal is male or male, and the input end is female or female. When you install a balanced amplifier or weld a balanced signal cable, you must be careful to avoid the occurrence of the same-sex phase. The predicament of rejection. Among the three contacts of XLR, there are certain rules for wiring; you can find that the three contacts on the plug or socket will be marked with numbers 1, 2, and 3, and number 1 must be the ground wire. The metal contacts in the No. 1 hole of the XLR female header or socket are longer than those in the other No. 2 and 3 holes. This is to ensure that the ground wire will be contacted before the signal when connected; the ground wire will be separated later than the signal when disconnected, so as to ensure that there will be no accidental bumping or smashing of the speaker when the signal wire is plugged in and disconnected from the power-on state. Pins 2 and 3 are connected to the live wire and the ground wire respectively.

So it's best to read the manual before starting the sound, because every audio equipment with balanced terminals will definitely explain in detail which foot is the live wire and which foot is the water line. Just read the instructions carefully and deduce it. That's it; in case the output is reversed from the signal all the way to the rear stage, the easiest way is to reverse the positive and negative of the speaker wire.

About Us
L&G ELECTRONIC CO.,LTD. factory in China mainland was established in 2007 and the HongKong office Was established in 2014. We turned into a manufacturer engaged in the R&D, manufacture and trading companyof Switches, Thermalprotector, Potentiometer ,rotary rheostat and jacks.
Specialized In Product
Quick Links
Follow Us
Factory Address:
Dazhou Industrial Zone, Shijie Town, Dongguan City, Guangdong, 523291 CN